1. Ukraine in its macro-regional context: a fragile interface between Europe and Russia

Ukraine plays a key role in the delivery of Russian energy resources to Europe: 60% of the Russian gas consumed in Europe transits through Ukraine. In the last decade, Russia has developed alternative routs: the North Stream (under the Baltic Sea directly to Germany, Map 1) and the Blue Stream to Turkey. The South Stream project under the Black Sea to Balkan Europe is under construction.

Both EU and Russia tried to convince former Ukrainian leadership of the advantages of an economic integration with them. EU suggested to sign the ENP Association agreement while Russia insisted that Ukraine joins the Eurasian Custom Union under Moscow leadership. Each side argued that the maintenance of close economic relations was incompatible with the integration with the other partner and thus considered it as a zero-sum game which triggered the current crisis in November 2013, when Russia requested Ukraine to join the Eurasian Custom Union before signing the Association agreement during the Oriental Partnership Summit.

EU and Russia are the main partners of Ukraine (Map 2) as regards to foreign trade, and its most important sources of foreign direct investments.

They are also the main destinations of Ukrainian emigration. EU provides Ukraine with the largest part of foreign aid. The territorial distribution of flight connections reflects this situation. In relation to population, Russia, as trade partner (imports+exports), is much more important for Ukraine than the EU member states. The legacy of the common Soviet past clearly shows in the distribution of exports: Russia is a much more important foreign consumer of Ukrainian goods than EU. Moreover, Figure 1 shows that the EU share in Ukrainian trade has been rising in the 1990s but is declining since the 2000s.

Map 3 shows the GDP per capita in EU Eastern Neighbourhood by regions. In the last decade, Ukraine economy has shown successive indicators of weakness. The gap between Russia economic growth and that of Ukraine has been rising since 2003, because Ukrainian productive system has not been modernising quickly enough and needed massive investments. Since 2005 Ukrainian trade deficit has been deepening and since 2006 the Ukrainian public debt has been rapidly increasing. As a result, Ukraine path is less and less alike that of an emerging economy; the country stands as one of the poorest area of Europe Eastern neighbourhood, along with Georgia and its breakaway parts –Abkhazia and South Ossetia. The Western part of Ukraine shows a particularly low level of development. The contrast is obvious compared to Russia, and even to Belarus which has been doing quite better than Ukraine since the 2000s.

As compared with its neighbours in the Black Sea basin, Ukraine economic dynamics during the 2000s was particularly bad (Map 4). Still, the situation in its East, the most industrialised and urbanised region, was more favourable, partly because of its rapid depopulation (GDP per inhabitant rises when population declines). This development was in striking contrast with the progress of most regions of Turkey and of the neighbouring Russian Krasnodar krai. 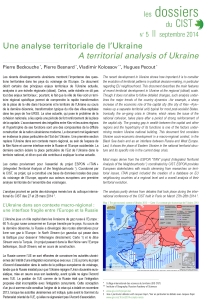